We waved good-bye to Jordan and sailed for the port of Safaga, situated at the centre of  the Egyptian Coast on the Red Sea.  We gathered at 8 a.m. and were shepherded onto the dreaded coaches, clutching our overnight cases for the three-day land visit to Luxor.  The trek from the port to Luxor took 3.5 hours, with lots of  stops at checkpoint stops along the way where unsmiling men carried fearsome weapons patrolled.

We passed vistas of flat deserts, barren mountains as well as fertile fields.

(By the way, about a week after we left Cairo, a roadside bomb struck a tourist bus and killed fourteen tourists from Vietnam.  Like our coaches, these tourists likely also had an armed guard on board their bus but how anybody protect you against a random bomb? This will definitely hurt Egypt’s slowly recovering tourist industry. But then I guess that was the terrorists’ intention.)

The moment we reached our hotel we were scooted into a banquet room where a buffet lunch awaited.  An hour later, feeling somewhat refreshed we scurried back on the buses (there were five coaches and we always travel as a convoy) for the ride to Karnak Temple.

Our guide, a woman named Vivian, a passionate Egyptologist, had all the facts at her fingertips, and made them interesting. It helped that she had a warm and lively personality as well.

Karnak did not disappoint. Dedicated to the gods Amun, Mut and Khonsu more than 2,000 years ago, we gaped at the dozen, 80-ft columns which form the central aisle of what’s known as the Hypostle Hall. The Hall covers an area of fifty-thousand sq. ft. The tour lasted almost four hours, and worth every minute.

The visit to the Valley of the Kings and the West Bank was even better.  I’m proud to say I descended into the tomb of King Tutankhamun and met the boy king in the (desiccated) flesh.  Lying in his glass coffin, he does look like a boy, and has very, very long toes. The contents of his tomb, like the many others that have excavated in the valley, are scattered around the world.  We got a chance to see some of his wonderous golden coffins, famous solid gold mask, and jewels in the Cairo museum.

The hieroglyphics inside the other two tombs we saw were remarkable.  However, it turned out I passed on the most remarkable of all because of the $60 U.S. entry free:  the 137-metre elaborately decorated tomb of Seti I, who died in 1190 BC.  However those who weren’t as cheap as I am said they would have paid double the price, it was that beautiful.  (How could I have known? We’d already seen so many tombs by then.) 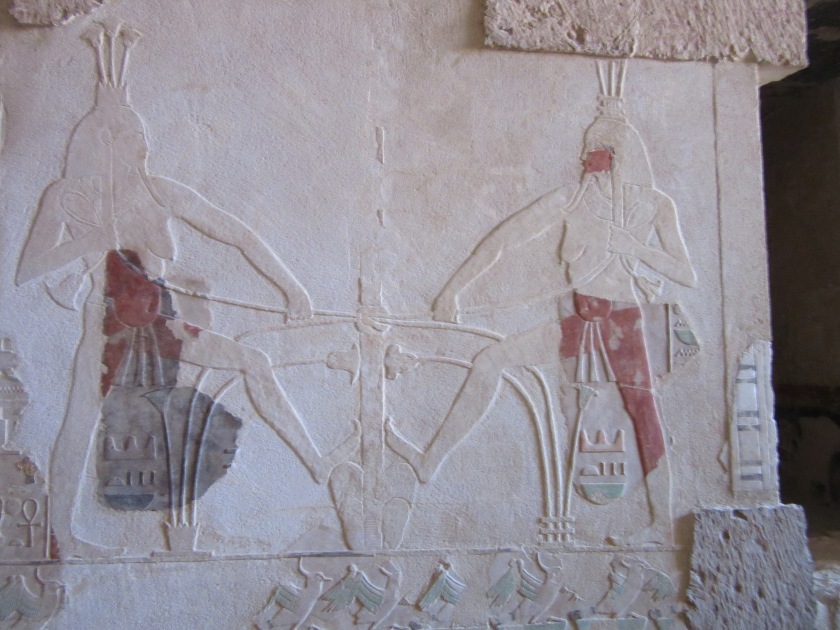 The next stop that day was my favourite: the mortuary temple of a remarkable female pharaoh called Hatshepsut.  She reigned for almost twenty years, and like her male predecessors she wore the ceremonial beard of a male ruler.  Her temple is wide and low; it hugs the earth, unlike the soaring pyramids, columns and obelisks the men erected to honour themselves.  (No surprise that her male successors did their best to erase her from history by scraping her name off monuments and inserting their own.)

After that we had an entire free afternoon. Three of us decided to walk to the local souk, which the hotel staff had told us was a mere twenty-minute walk.

It was a harrowing experience.  From the moment we stepped out onto the street we were assailed on every side by horse and carriage drivers, taxi drivers, little boys selling post cards, men wanting to escort us across the street for our protection.

The most aggressive one, a fellow horse and carriage guy, followed us almost the entire way with his incessant sales pitch–the souk is much too far to walk to–alternating with helpful directions about how to get there, which we didn’t trust for a moment.

He looked down as though ashamed.  “Sorry, madam, sorry.”  We resumed walking.  But Mr. Horse-and-Carriage didn’t leave. Not until he was good and ready, which was another ten minutes.

No sooner did the horse man make a U-turn than a man on foot attached himself to us.  Another endless monologue, offers to take us to the best “cotton” store, etc. etc.  “You can trust me, madam.  I am Coptic Christian. I work for the Church,” he said, pointing somewhere in the distance.

Ignoring him, we found the souk, although he stuck to us like a barnacle.  When we stopped at a T-shirt place, one of several hundred storefronts, he gave the store owner the impression he’d brought us and when I bought a T-shirt the shopkeeper gave him a commission.

“I don’t want any trouble madam,” he replied.

The fun was just beginning at the souk.

I have never felt so assailed in my life.  The merchants, sometimes half a dozen at a time, trying to snag your attention as you make your way down the long, long aisle between the shops. If you have the misfortune to show interest in any of their wares, the sales pitch heats up in a serious way. They do their best to lure you into their small shops with promises of “no hassle.”  Inside, you don’t get the chance to look at anything because they’re pulling out this, and that in rainbow colours. If those don’t suit they follow you out the door making other suggestions.  If you have the misfortune to want to buy something then comes the exhausting haggling. No matter what you end up paying, you walk away feeling like you’ve paid too much.

I didn’t dare take any pictures at the souk for fear I would have had to pay the owners of the shops I happened to snap.

We left the souk with relief. Too exhausted to walk back to the hotel we opted to take a taxi.  First came the haggling with the owner of the rust bucket called a car. We settled on $3 U.S for the seven-minute drive.

We got in, gave him the name of our hotel and off we went.  Ten minutes later we realized the driver had no idea where our hotel was situated (a five-star, for gods sake).  Luckily, we had maps.  Off we went again.  Turns out he couldn’t read maps either and he got lost again until he finally stopped a real taxi driver to asked for directions. So we made it back okay.

I had a nap before dinner.

After Luxor we spent the next five days at sea, a really good thing, too, because by then I’d developed a nasty chest infection, as did forty others in the next day or so.

My Christmas turkey came with antibiotics and a cough expectorant.